How I built a wall of FUZZ pedals! 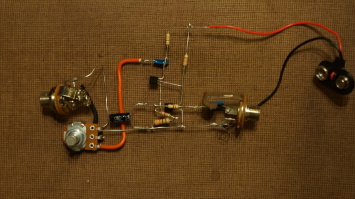 In 2020 as I wanted to make some serious noise I decided to find a way to make my own fuzz pedals. These were all built of mostly out of either recycled (scavenged from old broken electronics) or vintage NOS parts I found in junk drawers in thrift stores.

I still fine tune on them once in a while when I feel like it so they're all constantly slightly changing.

They are all surprisingly different sounding .

The sounds can range from sweet, cleaning up nicely with use of the volume control to extremely violently sounding machines

Hear some of them in action on the Nightmares of Christ recordings.

- Sounds perfect if you put it after an overdrive.

- White dial is bias, silver is gain, red is volume and switch chooses between a blue LED which is louder and crisper sounding than the other diode.

- You can hear it on Boundless by Nightmares of Christ (Fulltone OCD into this one into a Quilter 101 and a Quilter extension cab).

- A ton of different diode combinations

- Fuzz Face circuit - pretty straight up, but mounted in a small enclosure and using an eyelet instead of printed board or point to point...and it has George Carlin's eyes that moves around when you do.

- One fuzz dial and one volume dial, cleans up pretty well.

- Modified Fuzz Face housed in an old wahwah enclosure the output is controlled by the foot.

- Left side dial controls the fuzz and the right side the bias.

- Modified fuzz face where you can set the bias on both the transistors, there is a dial for changing the input cap - and there is a switch that activates another transistor that functions as a clipping diode

- Very fat and full sounding and that clipping transistor really makes a difference.

- Modified Fuzz Face where I took just about all the caps I had in a box and made all the caps switchable (very out of spec values available too) and added a couple of diode clippings too on the output that can be dialed in.

- Although it was just an idea I had it turned out to be an extremely wild sounding machine. I don't know if it's because some of the caps might have dried out, but it sure can make some wild, exploding sounds.

- Excellent for recording, but hell to find a sound twice with all those settings.

- Japanese transistors from an old Sony Walkman from 1970

- Two very similar looking Fuzz Face circuits that only has a volume knob and an input cap switch.

- I wanted to make my own circuit board so these are made out of some old junk holey board and some eyelets hammered in.

- Although they look similar the transistors are carefully chosen from their hfe so one sounds like a 60s fuzz while the other one dooms like there will never be a tomorrow.

- If they both are switched on at the same they do wonders for each other.

- Modified Fuzz Face that is always on and you control how much fuzz you want with your volume control on your guitar.

- Switchable input caps makes this one really good both for guitar and for bass.

- Goes from pretty sweet fuzz ala 60s recordings to the gnarliest imaginable tones if you want those - and since the bias is set up right it cleans up just fine at most any setting. 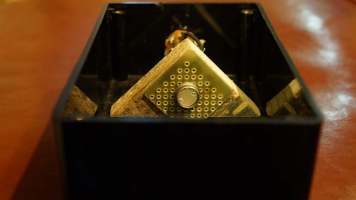 - This is a super simple setup: flashing lights at this photoresistor will make the resistance rise and fall - which changes the value in the expression input of eg. a delay pedal

-Housed in parts I had laying around made it look outer worldly and the shiny surface made the light reflect oddly.

(the housing was reused for the Parrot fuzz).

- You can hear this thing in action on the Film album by K D'letta.